What is cloud computing?

By manel agustin 25 September, 2020 No Comments

Cloud computing is the technology that allows using servers through the internet, and that’s playing a key role on digital transformation in a wide amount of companies of all sectors. Big companies have been using them for a long time, and pymes are progressively adopting them thanks to the communications improvement and the cheapening of costs.

But what is really cloud computing? 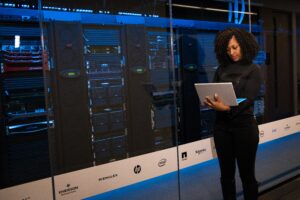 The cloud is an infrastructure compounded by a huge amount of large computers, located in special buildings with strengthened safety measures, distributed worldwide and connected between them via the Internet. Each of these huge computers hosts various virtual servers, which aren’t physical machines, but applications executed simultaneously in the host computer thanks to the virtualization technology.

Each one of these virtual servers is what we call a cloud server. It works the exact same way than a physical server located in our office, only that instead of being in our office, it is in the worldwide shared infrastructure called cloud and we connect to it through the Internet. Cloud servers aren’t purchased but rented, since it isn’t a product but a service.

In Novaclouder we support and help entrepreneurs of every sector succeed. Our solutions reduce inner expenses and enhance our customers’ businesses. Your success is our success.